OpenADMS Node 0.7 (“Geneva”) is available for download on GitHub. This version is only a small update with better database support and several bug fixes. The licences of source code and documentation have been changed to more permissive ones.

The next version will feature support for PostgreSQL.

OpenADMS Node 0.6 (“Fukuyama”) has been released and can be downloaded from GitHub. This version is a smaller update which brings support for the document-oriented NoSQL database Apache CouchDB.

A pre-compiled version is available for Microsoft Windows (x86-64). 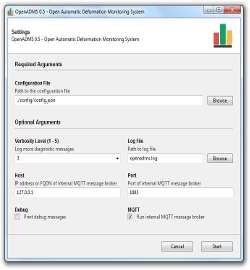 OpenADMS 0.4 (“Dar es Saalam”) has been released and can be downloaded from GitHub. This version is just a minor update, with a lot of improvements, including:

The upcoming version 0.5 (“Eindhoven”) will include support for JSON Schema and NoSQL databases.

We upgraded the IT infrastructure of our research project and replaced the old HP ProLiant DL380 G5 with a new shiny Supermicro pizza box server, equipped with an Intel Xeon hexa core, 128 GiB ECC memory, and two mirrored 1920 TiB SSDs. The new server runs FreeBSD 11 on top of the ZFS file system.

In data migration process we changed the backend and the design of the project website as well. Outdated pages have been removed and new content will be added soon. The server also got an X.509 certificate for Transport Layer Security (TLS) from the “Let’s Encrypt” Certificate Authority. All web services are now reachable by HTTPS only.